The display of the 6 stars of the Subaru logo represents the historical foundation of the FHI group. In 1953, Fuji Heavy Industries Ltd. was created when five companies invested together to form an aerospace venture. The five companies were:

The venture lasted two years and then these five investors merged together within FHI and embarked on the activities for which we know the FHI group today: Automotives, aerospace and industrials.

Interestingly, the logo creators were inspired by the skies and the stars. The chose a star cluster that represents “unity” in the Japanese culture. Here’s a satellite observation of the Pleiades star cluster by NASA. You can judge the resemblance by yourself.

It’s crazy what you can learn while searching for a nice font for your Subaru Blog. 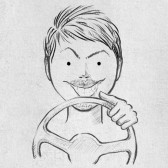